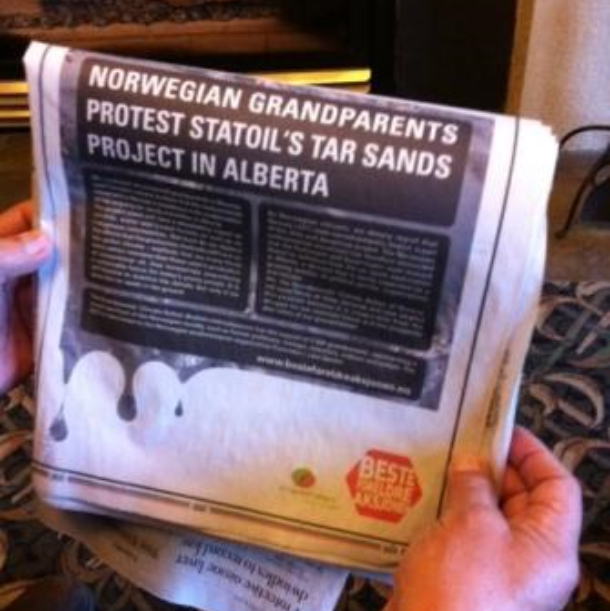 Canada evades a moral reality!
For Our Grandchildren has been inspired by the efforts of a Norwegian organization, Grandparents Climate Campaign (GCC). In 2011 GCC placed an advertisment in the Edmunton Journal opposing exploitation of the Canadian tar sands by Statoil, a corporation created by the Norwegian Government.  The ad stated:

«We, the Grandparents Climate Campaign of Norway, will stand firmly on these demands, as they are inseparable from the struggle for our common future and the prosperity and safety of our grandchildren».

This objection was based on their conviction that all countries have a duty to care for the planet so future generations benefit from the benign climate that today’s citizens have enjoyed. To quote James Hansen from his commentary «Cowards in Our Democracies»:

«The most basic matter, however, is not one of economics. It is a matter of morality – a matter of intergenerational justice.»

For many years the Norwegian Grandparents have maintained pressure on the Norwegian Government, with finally, some results!  Statoil has just announced that it is selling its oil sands holdings.

The message is that in the longer term the tar sands are an uneconomic investment. Statoil recognizes that even seismic exploration and offshore drilling and in the Canadian Arctic are more attractive investment opportunities for Statoil.

This reality is even recognized by the empire of the Koch Brothers, which is reducing its investment in the tar sands.

But the Canadian Federal Government and the Alberta Provincial Government don’t fully recognize this reality. They approve of huge investments in pipelines to export tar sands bitumen to other countries.  Like Norway, Canada considers that it must compete with other fossil fuel exporting countries for a share of the world market for oil.

Unless Canada and the rest of the world ignore the responsibilities they assumed under the Paris Agreement, these pipelines will be a white elephant in a couple of decades.

4RG regrets that it is forced to admit that Hansen’s phrase «cowards in our democracies» fits Canada.